There are so few artists that manage to move into the higher echelons of householdnamery and still feel totally, grimily relevant to us every day. Despite David Shrigley’s 2012 Hayward Retrospective, his massive thumbs up set to grace Trafalgar Square’s fourth plinth in 2016, and numerous other brilliant projects behind him, his work still feels so prescient and so hilariously real that we’re still extremely excited by each and every project his camp announces. So when we were told about the new spoken word album he’s involved in, Music and Words, we were naturally intrigued.

The album is a collaboration with Scottish musician Malcolm Middleton (formerly one half of gloriously misanthropic indie duo Arab Strap); and bears the hallmarks of both artists: sparse beats, surreal yet banal imagery and miserabilism. There’s a wry playfulness born of indulging in the sort of beautifully bizarre brand of sadness and madness that surely only Shrigley and Middleton could concoct. 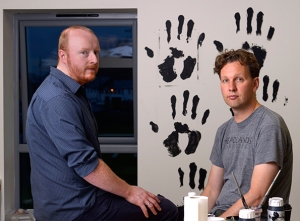 We chat to Shrigley while he’s down in Devon, a serene counterpart to the Glasgow that’s been his home since the age of 19. It’s clear from the record’s Scottish accents, morose sonic landscapes and of course, the involvement of Middleton, that Glasgow has clearly informed it more than the peaceful, undulating wilds of the West Country. “I was a fan of Malcolm before I even met him,” says Shrigley.

“He asked me to do the cover art for his third album and we became friends. Then he asked me to do some artwork for his site, and rather than being paid I asked him if he would do a musical track for the next spoken word record I did about a year later. But that was seven or eight years ago.”

This lapse in time is perhaps indicative of the Ivor Cutler-esque universalism of the mix of the esoteric and the everyday that Music and Words so succinctly manages to distill. It all sounds incredibly Shrigley: you can almost see his spidery lettering scrawling out the words to Dear Brain; the startled little squirrel sketch in The Tree; the naked man in wellington boots inWalker.

So how far does the way he works when making spoken word, as opposed to purely visual art differ? “Well I suppose it’s very much a narrative thing. If you’re making an audio recording it offers different possibilities for the narrative, by getting actors in. It’s very much a collaborative process. When I work on films and things too, it’s about collaborating with someone who can do what I can’t.”

But where Shrigley’s no stranger to making spoken word records, Middleton’s scant, yet searingly effective musicianship adds a rather magical touch. “Originally Malcolm wrote some musical tracks and I fiddled around with them for around a year, then recorded a bunch of voice tracks,” Shrigley explains. “Or sometimes I asked him to just say what the beat was, if it was in 4/4 or whatever, then got the actors to record the tracks with a metronome in their headphones to keep it in time.”

He adds: “It’s not that I don’t understand music, but it’s good to collaborate with people who can do things better than I can.”

“All the big names are people I knew,” Shrigley shrugs. “All the others are people the record company [German label Tomlab] liked but it’s a good record. If I’d have done it myself it wouldn’t have been a pop record, which is what it is.”

By contrast, Shrigley says Music and Words is firmly a spoken word record, though for us the influence of Middleton and a certain type of Glasgow indie sadness is more than evident, which comes as little surprise. We suggest it sounds very much to be a Scottish record. “Oh yes, I thought ‘I’ll make a record for all the people who like Arab Strap’,” says Shrigley. “It’s just the circumstances – I’ve lived in Glasghow since I was 19, and now I’m middle aged. I’ve grown up in the cultural zeitgeist that’s been Glasgow in contemporary art and music.”

Having explored the worlds of music and opera (in 2012’s Pass the Spoon – watch the trailerhere), we wonder what other media there are that Shrigley could turn his distinctly long-thumbed hand to. Television, it seems, isn’t likely to be a front runner.

“I get asked to do a lot of TV, people ask if I’d like to do something like Grayson Perry’s been doing, but I’m always hesitant,” says Shrigley. “As a rule of thumb, the things that get done are things you do yourself. In my experience [TV companies] always try and invent a phenomena to make a film about, so they’re documenting something that was their idea. If I suggest they make a documentary about a real phenomenon with a big reveal they don’t seem interested.”

Shrigley’s art however, like television, glories in unreality. In the track Caveman on the new record, the actor burst into laughter while discussing killing girls with stones. But that little cackle is perhaps one of the closest surmises we can make of Music and Words: a gleeful, slightly sneering, slightly sinister, always playful and often mad little sound that begs to be heard, but whispers not to be taken too seriously.

So where do the ideas come from? “I can’t answer that question with any degree of honesty. It’s like saying ‘where do you get your personality from’. The things you choose to make art about are quite elemental to who you are. I think the world view in my art is shaped by the world, but albeit showing a very processed version of it.”