Huck asked me to tell them about my top ten artists of 2014. Here’s a couple – for the full list head here.

I fell head over heels for Rist at her 2011 Hayward retrospective Eyeball Massage, and her new show at Hauser & Wirth proved that whatever the space, her work is an utter pleasure. Without sounding too earnest/hippyish/daft, only at Rist’s shows have I felt such a unity with others viewing the work – in no small part due to the fact she forces her viewers to lay on the floor, shoeless, rather than jostling for space in front of wall-mounted works. Though everyone will draw something different from her huge, surreal video pieces; everyone is united in the same utter sensory envelopment they offer, making her work go far beyond the visual and into something that feels much, much deeper.

I had the pleasure of meeting Barry Hale from Threshold Studios again this year, and the man’s thirst for technology-driven art, and his desire to help others feel the same at Thredshold Studios, is utterly inspiring. At this year’s Kinetica Art Fair he was showing a brilliant piece that’s been in the pipeline for a good 20 years, 63|3D, which used a 1960s Stereoscopic 3D arcade viewer to show Abraham Zapruder’s 8mm home movie of the Kennedy assassination in a way that’s brilliantly innovative, effective, and rather chilling. 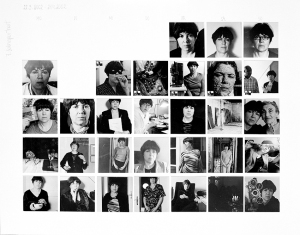 In a year where discourse about feminism has exploded into our consciousness in ways of varying credibility, one of the standout exhibitions exploring the theme was at Richard Saltoun Gallery. It showed work by Freidl Kubelka, a Vienna-based artist who, in a pre-internet era, seemed to predict two of the biggest concerns of 2014 – feminism and selfies. The gallery showed her Jahreportraits (Year Portraits) project, which began in 1972 and saw her take a picture of herself daily for a year, with the process repeated every five years.